OK, so this kiln did not cost just $200 - but the shell of it did. Just when I was getting ready to build my own kiln and was pricing out bricks, I found a used West Coast kiln on Craigslist. And it was only about an hour and a half away from me. I went down and checked it out and decided it would be perfect. What convinced me was that it had a swinging steel door filled with softbricks and I figured in the long haul this would save me time because I would not have to brick up and take down the door bricks for each firing. 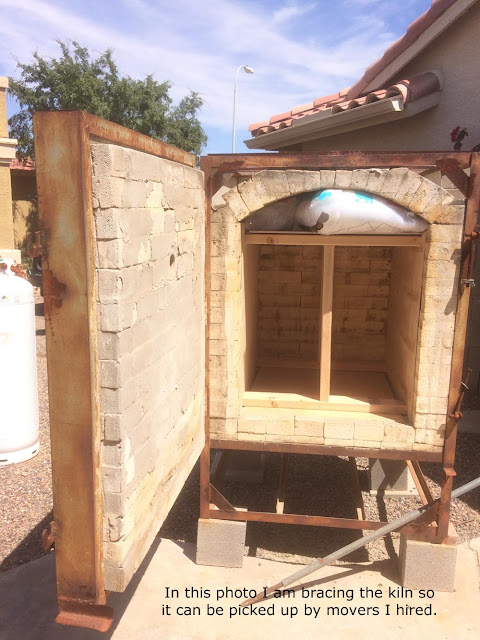 To get this heavy beast to my house I looked for movers on Craigslist and found a company that specializes in moving heavy gun safes. I figured if they could move a gun safe safely, they could move this kiln. I purchased some thin sheets of plywood to brace the walls and took along some bags of pillow stuffing to support the arch on the 100 mile drive to my house.  It made the trip in perfect condition - even though the movers did not arrive at my house until 11PM.  With a lot of head scratching and thinking they figured out a way to maneuver the kiln into my backyard kiln shed while I guided them with my flashlight on a pure black night. The cost for the movers was $600 but well worth it as I had no way of getting the kiln home without them. 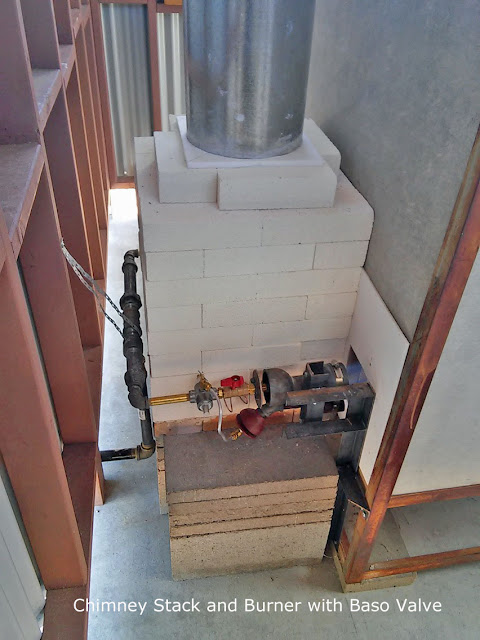 After the kiln was here I decided to redo the floor and the door with some fire brick that I purchased at a garage sale. While I was at it, I cut in burner ports and an exit flue on the back wall of the kiln. This kiln has some type of fiber board material holding the walls in place so I wore a respirator while cutting the openings. I used Mel Jacobson's 21st Century Kiln book as a guide for the size of the openings and when it came time to build the chimney stack. I also filled in the exit flue that was on the top arch of this kiln since in a former life it was an updraft kiln and I wanted to work with a downdraft. I feel that in updraft kilns all of the heat races up to the top to escape out the flue instead of working its way around the pots. My kiln has Ward Burners on it. The burners themselves are not expensive but the Baso valves on them are. To get two burners with Baso valves cost right around $1000. The Baso valves detect if there is flame at the tips of your burners - if the flame goes out, the Baso valve shuts the gas off preventing an explosion. Even though they were expensive, I am glad to have them.

The flue of my kiln is now level with the floor instead of being up on the roof. The hot gases exit the flue into a stack of bricks where I have a kiln shelf that serves as a damper. Above that is chimney made of Kaowool sleeves surrounded by sheet metal pipes. It's a very effective system and it is outlined in the 21st Century Kiln book. The only problem I ran into was that my first shipment of Kaowool sleeves arrived damaged from Smith Sharpe Refractories. They sent out a second batch which arrived intact, but it did slow the construction process down by a week.

I fire this kiln really quickly. I warm the kiln up to 400° F in two hours using just the pilot light burners. I do this to baby the Thermal Light kiln shelves I use. Then it goes from 400° F to cone 10 in just 4 hours. After that I do a controlled cool for two hours between 1900° F and 1500° F.  The kiln really reaches cone 10 in just 4 hours, but with the warm up and controlled cooling the overall firing takes 8 hours.

Comments are moderated.
I check them daily.
Please be kind and be patient.

John Post
I am a retired public school art teacher who is currently working as a potter in Sedona, Arizona. Being retired gives me the freedom to follow my interests when it comes to making pots. One of my passions is developing new glazes for my pieces and because of that I try to include some new glaze tests in every firing. Any time you are experimenting there is the risk of failure - I just take the failures in stride as part of the learning process and race on to the next experiment with no loss of enthusiasm!

Pages on this blog